News: The Ten Kingdoms of the New Order

In a speech to the opening session of a recent summit meeting of the Organization of African Unity, UN Secretary General Kofi Annan urged the leaders to shake off their deep divisions and work together against the continent’s poverty, wars and health crises. “This historic effort will require leadership, courage and a willingness to depart from the ways of the past if it is to do for Africa what the European Union has done for Europe.”

The world was divided into ten financial kingdoms as envisioned by the Club of Rome in 1973 in their report called the “Regionalized and Adaptive Model of the Global World System.” The plan is being brought into life through the United Nations as regions begin to form economic blocks loosely modeled after the European Union. A plan of global regions or blocs of power has been in various stages of planning for some time (see 1942 map).

African leaders reason that they must first build regional blocs in west, central, east, north and southern Africa and then ultimately merge these into one big economy – on the basis that bringing four or five groups together is easier than negotiating with 53 countries at the same time. The African Union will eventually have a common parliament, central bank and court of justice. In the long run, a common African currency is also envisaged.

Regionalization is one of the key goals of the United Nations as it moves towards becoming a world government under the guise of global governance. The 1995 UN Funded Commission on Global Governance highly recommended breaking the world into governing regions. “Some issues are best dealt with regionally rather than globally…. Regional economic groups can also contribute to burying historic enmities through developing closer economic and political linkages, realizing economies of scale, developing common infrastructure, and pioneering new methods for deepening integration in advance of progress at the global level.” That is exactly what Africa is beginning this year. A “framework for allocating responsibilities between institutions of global, regional, national, and local governance in an efficient way” is being debated and mainstreamed in Europe. (“Foundation of a Global System of Greed“; “Modern Mammon: Power of the Fractional Reserve“; “System of Mammon: The World Banking Hierarchy“)

On January 21, 1999, the UN issued a new report entitled, Towards a New International Financial Architecture (IFA). While the report focuses on correcting many global financial deficiencies, “The recent [Asian] crisis has demonstrated a fundamental problem in the global economy,” asserts the IFA. The primary cause of the global crisis, alleges the report, is “the enormous discrepancy that exists between an increasingly sophisticated and dynamic international financial world, with rapid globalization of financial portfolios, and the lack of a proper institutional framework to regulate it.” (“Delusion & the Tightening Noose of the Beast System“; “The Image & Mark of the Beast System“)

The IFA is designed to overcome the failings of a single, global financial/trade structure like the World Trade Organization by using regional institutions patterned after the European Union. It details a comprehensive plan where a strengthened UN Economic and Social Council or newly created Economic Security Council would establish and manage global macroeconomic economic policy under which individual regions would operate.

Within this structure, the International Monetary Fund (IMF) would be restructured so that it would increasingly serve as a world central bank and taxing authority. A single world monetary system is implied, a byproduct of the world central bank.

The plan has been underway to “create a world financial authority…in charge of setting the necessary international standards for financial regulation and supervision, and of supervising their adoption at the national level.” All of this would be administered through “a network of regional and sub-regional organizations to support the management of monetary and financial issues.”

The Bible reader should note that scripture talks about the world being divided into ten economic kingdoms or horns during the last days in Daniel Chapter 2, as ten toes of the statue that will be destroyed, as well as Daniel Chapter 7, and Revelation Chapters 13, 17 and 19.

In Daniel 7:20-22, scripture speaks of a ‘little horn’ coming out of the 10 Horns, who will speak boastfully against the Most High Elohim [‘God’]. Some theologians boldly declare that this ‘little horn’ signifies the antichrist. Without question, this little horn is of the dark kingdom of the world that will wage war against YHWH’s people. The fact is that the entire world is under the power of the antichrist, Satan the devil. Anyone that thinks otherwise is fooling himself. The dark kingdom of Satan was defeating the saints until the Ancient of Days came and pronounced judgment in favor of the saints, casting the proponents of the dark kingdom into the Lake of Fire. (Daniel 7:26) YHWH will conquer the dark kingdom of the world. The Almighty accomplishes this through warfare. In Revelation 19:11-21, Yahshua [Jesus] the Messiah comes down from heaven with his heavenly army to wage war against the dark kingdom of the Beast. (Revelation 19:11-21) The kingdom of YHWH will be established on the earth through a final conflict referred to as the Battle of Armageddon. (“World War 3? End Time Insights About Gog and Magog“; “The Antichrist & the War on Reality“; “The Reality of the Antichrist“; Revelation 11:15; Psalm 22:28; Jeremiah 30:11; Joel 3:16; Obadiah 15-17, Habakkuk 3:12-13; Zephaniah 3:8; Haggai 2:22)

“And in the days of these sovereigns the Elah [Elohim, ‘God’] of the heavens shall set up a reign which shall never be destroyed, nor the reign pass on to other people – it crushes and puts to an end all these reigns, and it shall stand forever. Because you saw that the stone was cut out of the mountain without hands, and that it crushed the iron, the bronze, the clay, the silver, and the gold, the great Elah has made known to the sovereign what shall be after this. And the dream is true, and its interpretation is trustworthy.” – Daniel 2:44-45, ISR98

The 10 kingdoms have been involved in an underground discussion for quite some time. The 10 regions are part of an ongoing plan that few people realize. Are we seeing prophecy unfold before our eyes? Undoubtedly so. Time will tell when this 10 kingdom arrangement, organized by an ongoing politic since 1973, will be revised in the near future. 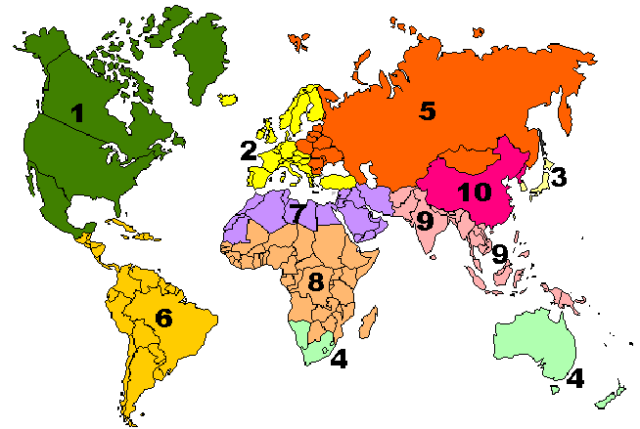 “For YHWH so loved the world, that he gave his only begotten Son, that whosoever believeth in him should not perish, but have everlasting life.”

Thank you for sending the Messiah, your only begotten Son to be my Savior. I believe in Him and have made this belief the center of my life. Because of this, by faith I have everlasting life! Thank you! I repent of my sins and of my past, freely admitting that I have fallen short of Your glory. I look fully forward to you in my life and commit my life to You. Thank You YHWH, my Heavenly Father for setting me free in the name of your Son Yahshua [Jesus]. Amen.

You will never enjoy true freedom through the Messiah and power of the Holy Spirit unless you read and absorb the Bible in prayer and trust. You will never know this freedom until you experience it for yourself. Get to know your Heavenly Father, His Son and allow the Holy Spirit to work in your life. The Holy Spirit is your teacher, your Holy Counselor that lives in you to help you learn about the truth of YHWH and His spiritual gifts.

Satan does not want you to have the excellence of YHWH in your life. People pray for protection and want to be taken care of, but often do little in growing close to Him. The world, your husband, your wife, your family, your government do not build your trust in YHWH or free you from spiritual bondage. Your church or your pastor cannot save you. Education, power and money will not free you, but only the Word of your Heavenly Father. Salvation is a daily walk, an act of love for yourself and for those around you, not a one-time event that centers only on you. Make the Word of YHWH your own, your very life!

YHWH is Yahweh, the covenant name of your Heavenly Father.
The names Yahshua and Yahushua are original language names for Jesus,
He is often referred simply as the Messiah or Master.

No portion of this site is to be copied or used unless kept in its original format in the way it appears along with author and website attribution. Your use of this website constitutes your agreement with these terms.
Copyright by Bible Vision International — All Rights Reserved

This site uses Akismet to reduce spam. Learn how your comment data is processed.